Ataxia has NO Borders

Our founder Alan Thomas (@ataxiaandme) met with John “JC” Colyer at the 9/11 memorial in New Jersey. It was a moving experience in a very emotional place. 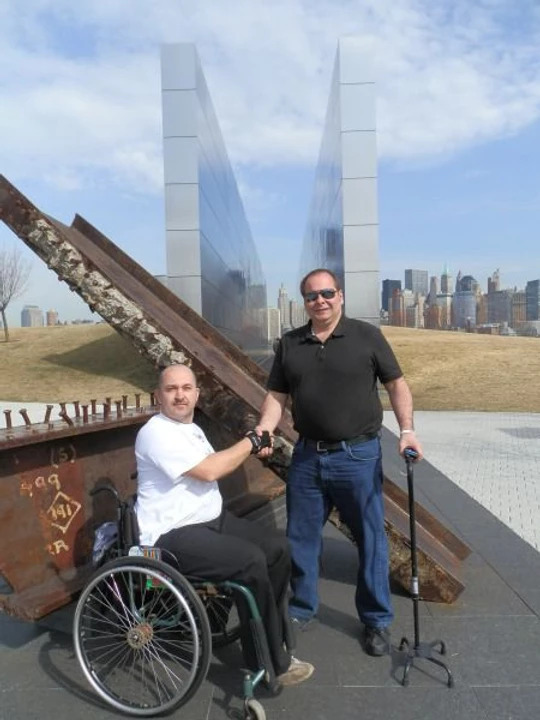 This is JC’s story:

My name is John “JC” Colyer, I’ve been diagnosed with a neurological disorder called Cerebellar Ataxia. I have been clumsy all my life, I had to put 110% effort to be of average ability. I thought it was my normal, but in 2007 it started to become a disability, I was tripping and falling more often and fatigue and leg cramps became an issue especially on long drives.

Driving home one late night of work in 2007 I had an accident. I thought it was because of fatigue. It was a blur. I went to a neurologist for exam, as soon as he saw me walk and talk he asked, “how long have you been like this?”. I said “like what ?”. He said, “you have a neurological issue, we need to do test”. He ordered an MRI of my brain and genetic blood work, Pandora’s box was opened!

I remember sitting in my car in the parking lot knowing my life will change drastically. I went for all the tests, even knowing my insurance would not cover most of it. I was all in now. When I went back to the doctor to get the results, I was frightened knowing something will be found wrong, I was always alone when I went.

As I figured the MRI showed “Cerebellar Atrophy” which causes ataxia, it is chronic, meaning no cure, and it is progressive, meaning it will get worse. The genetic blood test showed no red flags, meaning WHY was unknown, he told me I should “get my affairs in order”, he estimated I would be confined to a wheelchair in 5 years, that was 2007. Now in 2019 I use 2 quad canes or a rollator to walk upright, I’m a self-appointed STUBBORN S.O.B! I live in Seaside Heights, NJ, moved here in 2000. It’s a beach town on the Jersey Shore known for its Iconic Boardwalk and Beautiful Beaches. When I first moved here I would walk the boardwalk almost every day, though today, I rarely walk it as it is too difficult.

On 29 October 2012, I was directly struck by Superstorm Sandy and I evacuated the day before to a Red Cross shelter in Toms River, NJ more inland. The storm did heavy damage to the town and FEMA got involved, I spent 2 weeks in 3 different shelters they shuttled us to, then 4 ½ months in a FEMA funded hotel room in Atlantic City, NJ, about 1 ½ hours away. Luckily I still can drive a car and it was safe at the first shelter I went too.

I was definitely struggling with PTSD and my disability made it more challenging. I had no choice but to follow instruction. It changed me. I had to learn to put my disability second, others had to overcome the effects caused by the storm and my disability was not a priority. I understand that I was able to move back to my apartment in late March 2013, but my apartment was covered in 3 feet of water which had to be gutted and rebuilt. I lost most of my belongings but I’m glad I was evacuated. I did change when I came back, I was more determined to not let things or people bring me down, it meant severing some ties.

I wanted to be an advocate for other people with disabilities, we are people first! The internet became my vehicle, I found support groups and became active in them. I wanted to share my experience as a late onset person with a disability to those who have been all their lives, I knew both sides of the fence.

I was not instantly received well but my determination made the difference did not falter as everything takes time. I tried to find ways to physically be in the company of others with disabilities, both physical or developmental, visible or invisible, some welcomed me, some did not, after time more did.

Food insecurity is a big issue globally which I have faced first-hand. I receive Social Security Disability benefits, and SNAP [food stamps]. For the last 2 weeks of every month my refrigerator was empty and I needed to do something. I found The Peoples Pantry in Toms River, NJ online. I went and they helped me with food, they also gave me a certificate for a meal at JBJ Soul Kitchen which was next door. JBJ stands for Jon Bon Jovi, his wife Dorothea thought of the concept. They offer a meal for an hour of volunteering or a fixed price of $20 for a 3 course freshly prepared meal with drink. You can also pay it forward if you like. It has become my SAFE PLACE. That is where I go 4 days a week, it is more than food to me, it has become my PURPOSE!

As I say – “WE ARE ALL IN THIS TOGETHER ,KEEP TRYING , STAY STRONG

If you would also like to get involve and share your experience with Ataxia or other rare condition, please get into contact with us through our social media linked below:

This website uses cookies to improve your experience while you navigate through the website. Out of these, the cookies that are categorized as necessary are stored on your browser as they are essential for the working of basic functionalities of the website. We also use third-party cookies that help us analyze and understand how you use this website. These cookies will be stored in your browser only with your consent. You also have the option to opt-out of these cookies. But opting out of some of these cookies may affect your browsing experience.
Necessary Always Enabled

Any cookies that may not be particularly necessary for the website to function and is used specifically to collect user personal data via analytics, ads, other embedded contents are termed as non-necessary cookies. It is mandatory to procure user consent prior to running these cookies on your website.