My name is Darcy Marie. I enjoy the simple things, shopping, horseback riding, walking in the park. But today I’m going to share my story.

As an infant, I was later at reaching my developmental milestone and was suspected to be a developmental delayed child. My parents were told when I started school, that regular education classes would have been too quick for me. While it later appeared that regular Ed was too quick for me, I started going to school within the special education classes. I was put in a special need’s classroom full time with speech and language support. Apparently I had developmental concerns in regard to my speech and language development and motor skills development, such as when I first learned to walk. As time went on it seems that I was a bit higher functioning than a lot of my peers in these classes, while the regular classes would still be too quick. I was like the middle person, not being able to fit into any category, and I was unique and different. I was a transfer student throughout my schooling due to special education classes, I would live in one area and a mini bus would come pick me up and I’d go to school in a different district than the one I was living in up until middle school. I went to about 6 different schools by the time I was done, never had the time to make friends I would lose touch with as I was constantly moving schools.

I started getting ill by the time I was 9 years old, which started with occasional “dizziness”. However infrequent at the time, it didn’t impact greatly with my day-to-day functioning. These “spells” would happen about once a month. By the time of middle school and going into high school, they became more bothersome and started happening more frequently. I began vomiting, looking as if drunk, nausea, headaches, abnormal ocular movements, poor balance and coordination, crossing eyes, as well as double vision. I would tremble and shake and have tremors during these periods. I would see doctors and specialists, test after test, neurologist after neurologist, and they would claim all my tests were normal. Nothing was wrong.

Doctors believed the cause was anxiety and I had to see a psychiatrist who put on meds without successful eliminating my symptoms. I became anxious and depressed over my condition as no one could pinpoint it. It seemed like a total MYSTERY.. or some sort of mystery illness that no one could figure out for years. It felt as if I was imagining it or that it was “in my head” and many doctors made me feel this way. I’ve had issues with emotional regulation and ended up being hospitalized several times due to that.

In 2005, I was put through a limited amount of genetic testing for hereditary Ataxias caused by repeat expansions, genetic mutations by Athena diagnosis. However, the results came back inconclusive for a variant found in the gene PRK CGG which is responsible for a type of ataxia called spinocerebellar ataxia type 14 or SCA 14. The results were uncertain that I had that form of ataxia, due to the variant found. No one sure. Later, when going through my second round of genetic testing, I found out it wasn’t significant for my symptoms. I was tested for the common type of Ataxias caused by repeat expansions.

In 2009, I was suspected to have a rare and unusual form of ataxia called Episodic Ataxia type2.

What is episodic ataxia type2?

This ataxia is characterized by prolonged bouts or spells of poor balance and coordination, nausea, vomiting, dizziness and vertigo, headaches, tremors, abnormal ocular movements, double vision, muscle weakness and fatigue. In between these episodes, which typically lasts from hours to days, individual may develop permanent cerebellar atrophy and nystagmus.

This condition has put me in a wheelchair for periods of time where I am incapable of walking. In school, the nurse would frequently need to get me a wheelchair to take me where I needed to go such as the bus at the end of the day.

In 2009, while I was suspected to have this form of ataxia, I was prescribed a medication called Diamox to help control my symptoms of dizziness and nausea. It doesn’t take away every symptom I have from my ataxia so it seems and treatment options are limited for this ataxia. Even though most of the dizziness is under control, I still notice I have frequent balance issues, whether it’s stumbling or periodically losing my balance while turning around corners and running into the side of the wall. I have collapsed or fallen before in physical education in school and eventually had to get a doctor’s note to not participate in gym classes as it was a triggering factor of my condition. I also had to stay away from caffeine as it’s been a triggering factor, watch the heat in the summertime.

On September 2020, I was finally transferred back to the same neurologist in Pittsburgh that had been dealing with my family’s condition for years with Ataxia at UPMC. It was the same office that suspected I had the condition back in 2009, but I was seeing a different doctor there. It was explained to me finally that I have midline cerebellar atrophy on my MRI’s which goes back to at least 2008, when everyone else had claimed I didn’t have anything wrong. It was quite a shock for me. Though cerebellar atrophy tends to be degenerative, meaning the nerve cells within the cerebellum deteriorate or die, which is usually a progressive condition. My condition showed no significant changes between the period of 2008-2017. As of 2021 I don’t know if there has been any change since my last test. My neurologist referred me to a Geneticist to find my gene variant for ataxia.

On December 28 2020 I finally did my genetics testing for ataxia, and I was tested for up to 1000 different genes that cause ataxia related to point mutations, deletions and missense mutations by gene DX. After nearly 2 months of waiting on the results, it came back as being “likely pathogenic” and positive for a CACNA1A related disorder, Episodic Ataxia type2. I was finally thrilled I was able to get the validation, and the confirmation on my form of ataxia!

Even though my variant is currently labelled as “likely” there has been multiple people which have the same variant in literature that have Episodic Ataxia. My genetics team feels pretty confident that it is the answer, but the answer isn’t still 100 percent certain. However, being LIKELY it means there is a very high chance that this variant is DISEASE CAUSING my ATAXIA. I’ve been recommended to follow up with my genetics team in a few years to make sure this variant upgraded from likely pathogenic to pathogenic (100% guarantee disease causing variant). My variant within the gene CACNA1A is c.835C>T p.R279C autosomal dominant inheritance 50% chance.

What are some signs and symptoms of CACNA1A mutations? 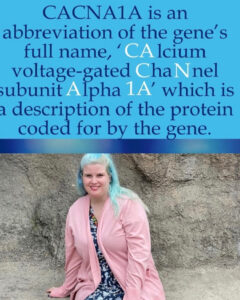 We would like to thank Darcy Marie for sharing her inspirational journey to diagnoses of CACNA1A and explaining the process to us.  Ataxia & Me was proud to support the first Awareness day for CACNA1A, on 19th March.

If you would also like to get involve and share your experience with Ataxia or other rare condition, please get into contact with us through our social media linked below:

This website uses cookies to improve your experience while you navigate through the website. Out of these, the cookies that are categorized as necessary are stored on your browser as they are essential for the working of basic functionalities of the website. We also use third-party cookies that help us analyze and understand how you use this website. These cookies will be stored in your browser only with your consent. You also have the option to opt-out of these cookies. But opting out of some of these cookies may affect your browsing experience.
Necessary Always Enabled
Necessary cookies are absolutely essential for the website to function properly. This category only includes cookies that ensures basic functionalities and security features of the website. These cookies do not store any personal information.
Non-necessary
Any cookies that may not be particularly necessary for the website to function and is used specifically to collect user personal data via analytics, ads, other embedded contents are termed as non-necessary cookies. It is mandatory to procure user consent prior to running these cookies on your website.
SAVE & ACCEPT